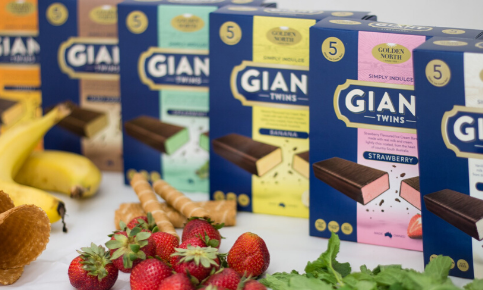 The refresh will give the old favourite a new look and introduce some exciting additional flavours to the range. Ahead of a new campaign, the most innovative change to the Giant Twins will be including an indent on the new look bars.

Whilst it remains an extremely popular ice cream dessert, customers questioned the fact that contrary to the name “Giant Twins”, there was only one bar of ice cream, not two.

“In the old days, Giant Twins were made in a cake tray – we poured the ice cream into the trays to freeze overnight. Each one of the trays, halfway along, had an indent – so that when the final product was finished, it ended up with the indent with it,” he said.

“The idea was that you bought it, broke it in half and had two ice creams (one for you and one for a friend, perhaps?!). Hence the name “twins”! Now, the process of forming the shape of the Giant Twin is automated.”

Several longstanding customers reminisced in the comments on being able to evenly break their Giant Twins back in the day, asking Golden North to make it possible again. So, for old time’s sake, it only made sense for them to keep their fans happy and put the indent back in the all-time favourite ice creams.

The idea behind the motive remains the same – to #SnapAndShare the new Giant Twins, although fans on social media joke that they would refuse to share their cherished ice creams, choosing to enjoy all for themselves.

Another change that the relaunch will see is the introduction of sleek new packaging and a choice of three additional new flavours; Banana, Strawberry and Spearmint. These three new flavours were launched as a limited edition back in 2017-2018 which have all been sold out in less than a week. With constant requests from Facebook fans to bring back these flavours, Golden North decided to launch the three flavours together with the new look, and has gained support from local retailers to stock these three new flavours.

Originally selling fresh milk and cream, the company’s history dates back to 1880 in a town called Laura in the state’s Mid North where the factory still remains in operation. In 1923, their first ice cream product was made, thus forming the iconic Golden North brand South Australians have come to know and love today.

Of the relaunch, Managing Director Peter Adamo says “We are very excited to bring a new, improved look to one of our most popular brands. The feedback we’ve received so far from focus groups has been very positive and we’re confident the public will embrace the improvements”.

The new breakable Giant Twins will be officially available for consumers to purchase in March from all supermarkets & Petrol & Convenience across South Australia.