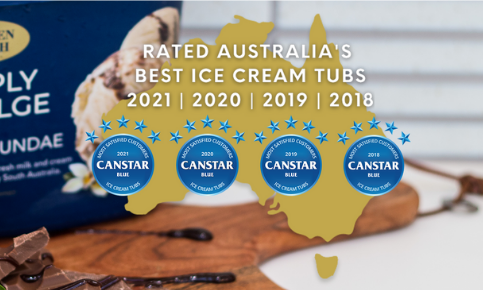 IT MAY BE AN OLDIE BUT IT’S STILL A GOLDIE!

Golden North, proudly based in Laura in regional South Australia, has scooped the top title and been rated the best ice cream tub in Australia again for the unprecedented fourth consecutive year.

The Australian business, owned by 5 families, has been making the country’s best ice cream in the quiet regional town of Laura, nestled between the Flinders Ranges and The Barossa Valley 230km north of Adelaide for nearly 100 years.

Megan Birot, Home & Lifestyle Editor at Canstar Blue said, “Golden North is an Aussie brand we all know and love and to see it rated best for overall satisfaction for the fourth consecutive year is a real testament to its longstanding commitment to giving Aussies the perfect blend of quality and value. The market for frozen desserts is very competitive and the fact that Golden North has outperformed big-name brands and multinationals on most drivers of satisfaction is a sweet victory for a regional brand hailing from South Australia.”

“Aussies rated Golden North best for taste, consistency, range variety, packaging, and overall satisfaction, out of 14 brands in total, which is an outstanding achievement.” Trevor Pomery, Director of Marketing at Golden North said,

“We’re a proud Australian owned and made brand and we’re thrilled to receive this award four years running. It’s a testament to our excellent products, made using only the best quality ingredients, but also to the desire of Australian consumers to support and buy local. “This is certainly something that is resonating strongly with Australians, particularly in current times, as people increasingly want to know the origins of their food as well as support local business.”

As the major employer in the regional town and surrounding areas, Golden North directly employs over 70 people. Golden North is available Australia wide from all good retailers and distributors and comes in a variety of creamy flavours. Golden North is also the only Australian ice cream manufacturer to be 100% palm oil free, as well as nut free and gluten free.