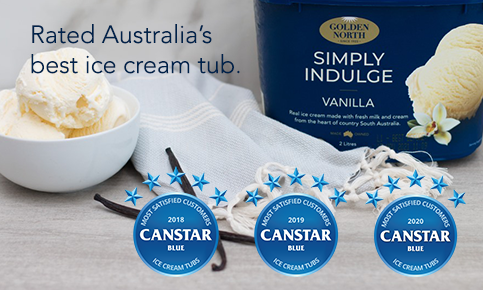 The iconic South Australian-made ice cream received the top rating from an independent survey of 2,791 consumers, conducted by Canstar Blue, earning the only 5 Star rating for Overall Satisfaction as well as top marks for Taste, Consistency and Packaging in this very competitive category.

The best ice cream tub brands in Australia, as rated by consumers in Canstar Blue’s 2020 review:

Golden North Marketing Director, Trevor Pomery said the entire team were overwhelmed with the news. “We were humbled the first and second year to receive such an amazing accolade, but to be consecutive winners 3 years running has completely blown us away”

“To be rated in this category amongst some pretty impressive competitors is truly amazing. To us it is recognition that our decision to continue making our ice cream with fresh milk and fresh cream was the correct decision.”

“This award is a huge win not only for us and our 65 factory employees, in SA’s mid-north town of Laura, but for South Australia as a whole. What a win for our state. We’re so grateful”

“We receive many requests from interstate customers who have tried our ice cream on holiday to SA and surrounds to bring the ice-cream to their local shelves. – We have certainly expanded our interstate stockists in the past 12 months with big thanks to IGA who have really come on board to support this expansion, and hope to make it available in more locations in the near future”

Established in 1923, the privately owned and operated ice cream manufacturer based in Laura South Australia produces a wide variety of ice creams including the iconic Giant Twins ice cream bar which recently relaunched with three new flavours, a snap and share indent and updated packaging.

Golden North is available in South Australian and NT Supermarkets as well as selected independent supermarkets across the nation.